One Sunday morning a couple weeks ago, we jumped out of bed, tossed back a few cups of coffee, hurried through showering and dressing, and grabbed the Zip Jar.

…to Astoria!
We hadn’t explored this town yet, so I was super excited.

Dave drove while I googled for ideas. A few things caught my eye: the riverfront trolley, the brewery with a glass floor over sea lion docks, and we figured that would be a good start.

Side note: unlike many Oregonians, we’re not huge fans of The Goonies, so getting a peek at the house didn’t interest us, and my unhappy knees weren’t up for a climb to the top of the Astoria Column, so although many friends recommended those things we opted to explore the riverfront on this particular day.

Having been a hotel concierge in my past life, I knew that a great introduction to a new city is to take a local tour, so we opted to hop on the Astoria Riverfront Trolley first, and then see what looked interesting.

This was an excellent idea.

Trolley rides in Astoria, are $3 for an all day pass, and we could hop off and on at stops along the route. They only take cash, but at the end of the day, we agreed this was the best $6 spent all day. We highly recommend the trolley to everyone visiting Astoria for the first time.

The volunteers running the trolley clearly love their city, and told entertaining stories of the early Chinese and Finnish immigrants in the area. We learned about the construction of the Astoria-Megler Bridge and picked up some ship-watching tidbits, like how you can determine the direction of the tide based on how the ships on the rover are aligned. We also learned about the fire that destroyed much of the original downtown, which was built on wooden piers over the river.

At the end of the line, they asked for volunteers to help turn the train around – they needed “either a dozen young men or one Finnish woman.”

Surprisingly, nobody raised their hand, so plan B kicked in. All passengers were asked to flip the backs of our seats over to the other side of the benches where we sat, and the train was instantly facing the way we had just come.

Then they shared a secret from the salmon canneries. Are you taking notes? This is a good one:

Havee you ever bought canned salmon in the grocery store? If it says Alaska on the label, your canned salmon was distributed out of a warehouse in Astoria.

ALL wild salmon caught in Alaska is canned directly on the boat that caught them. These boats then sail down to Astoria where pallets and pallets of canned salmon sit in warehouses. Each day, a variety of up to 150 different brand labels are secured to cans and shipped out to various grocery distributors, from store brands to Chicken of the Sea to high-end premium brands. But the cans are all exactly the same under the label.

If it says it was canned in Alaska, buy the cheapest one – they’re all identical inside.

We hopped off the trolley at the East Basin, where we watched the sea lions, wandered around the docks, and checked out the big ships.

The trolley has an app that shows you where it is at any given moment, so you know how quickly (or slowly) you need to hustle to get to the nearest stop. After amusing ourselves at the marina, the app showed we had a good half hour before the trolley would be back down our way, so we strolled along the waterfront, taking pictures and enjoying the gorgeous afternoon. 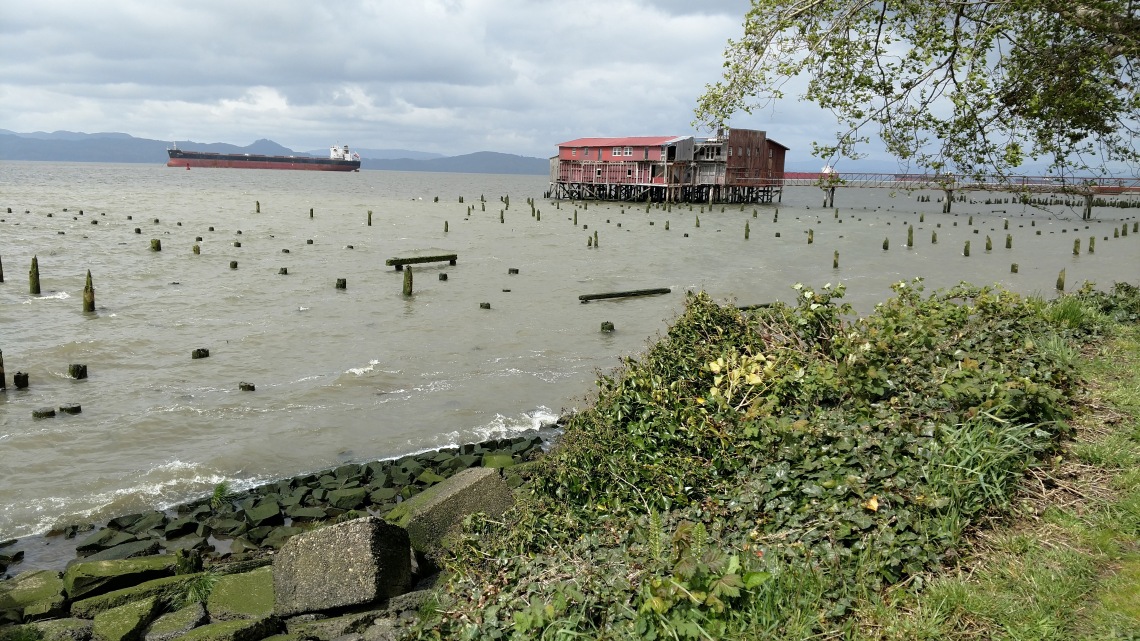 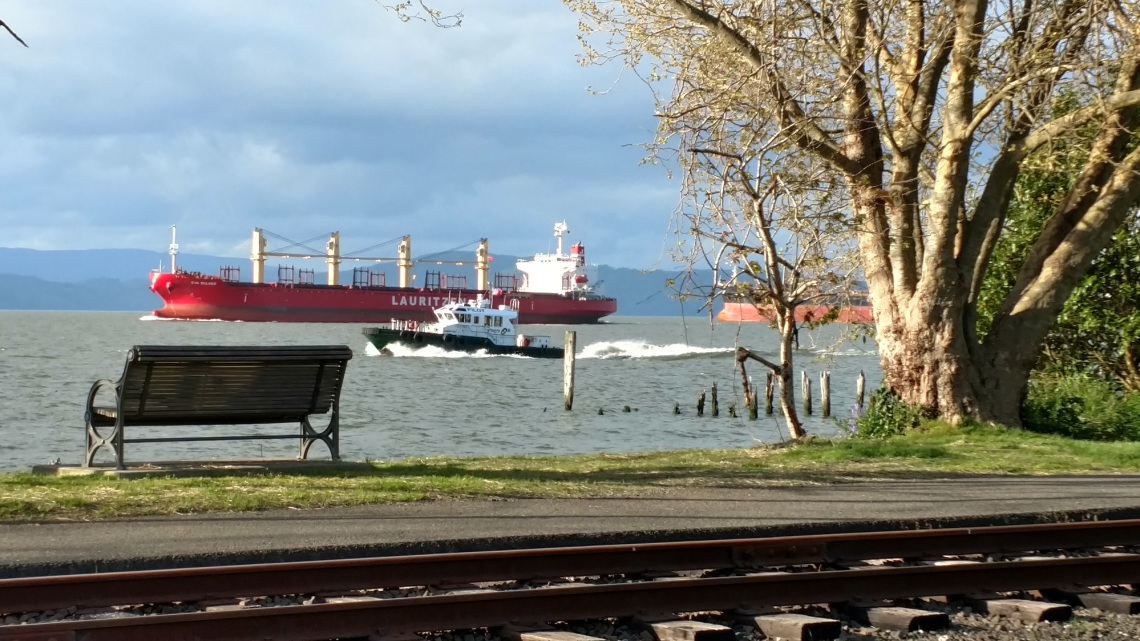 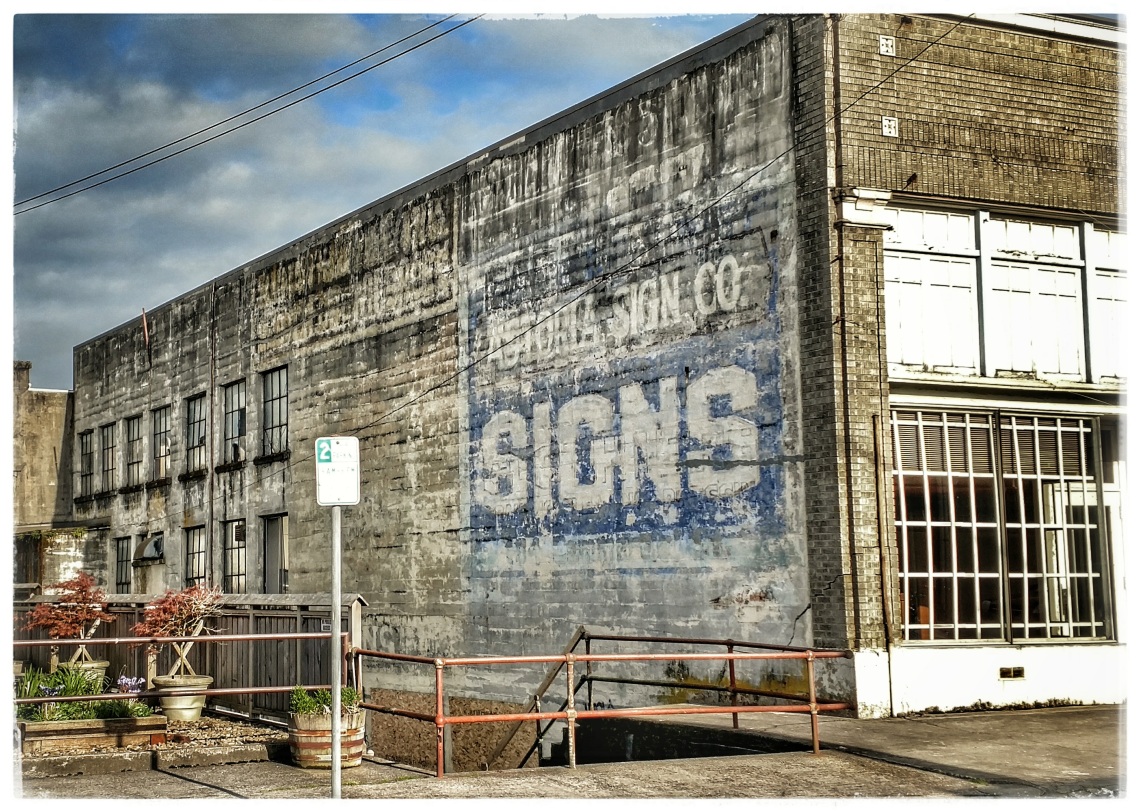 We had ice cream at Frite & Scoop. This cup is my scoop of Marscapone Fig with a Balsamic Ribbon on top of Earl Grey Tea with Blackberry. Yum. 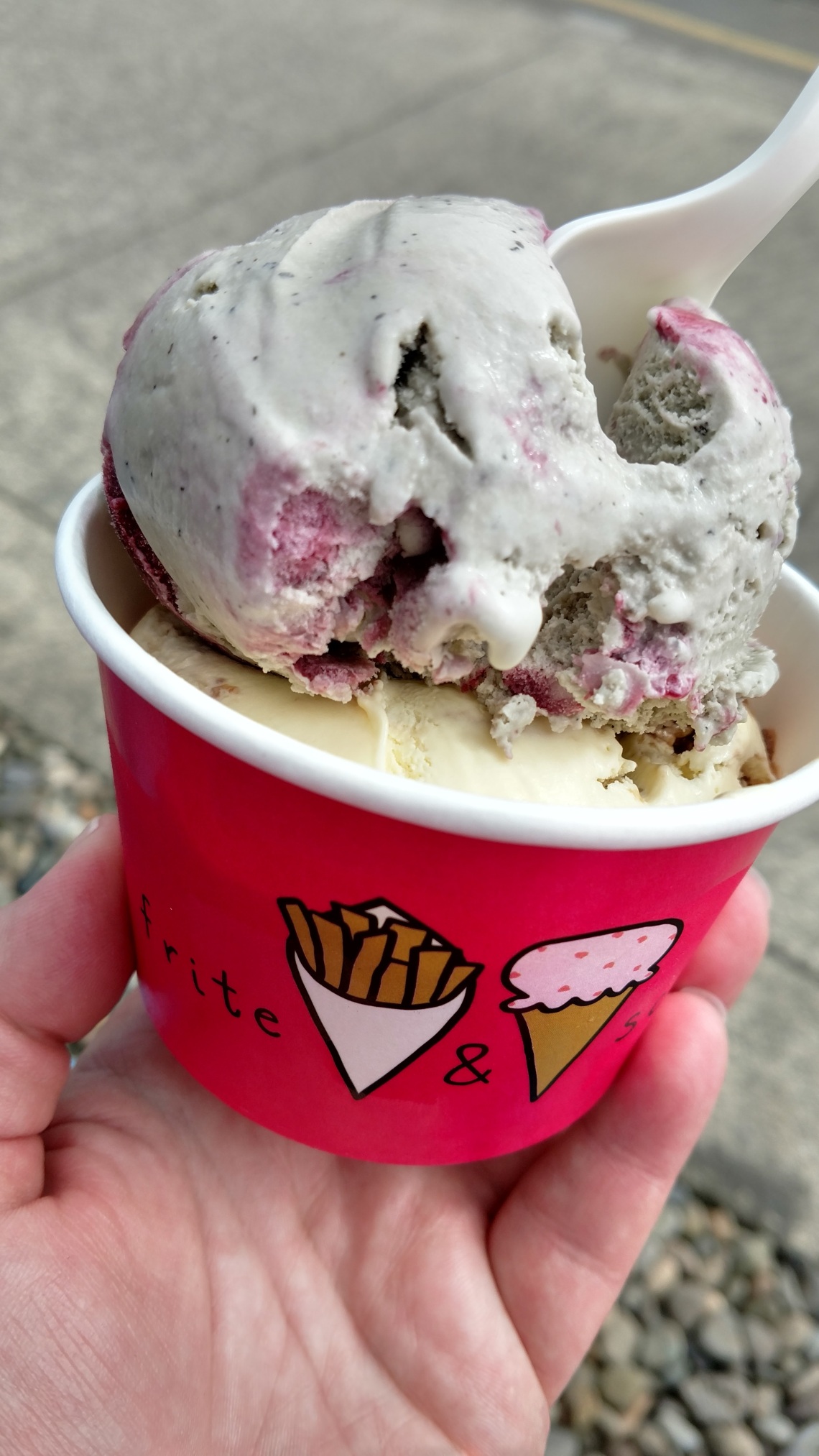 We counted the cats in the mural behind the Sears store. The volunteers on the trolley explained that there are supposed to be 10 or 11 cats hiding in the mural. We could only find 9 in the entire mural.

The boardwalk had a caution sign, which I found mildly amusing, but then the next one and the ones after that had us laughing so hard we could barely breathe.

Before heading home, we decided to stop in at Buoy Beer Co for a snack. I really just wanted to see the glass floor over a sea lion dock, but it was a good excuse for some fries and lemonade. I loved the artwork in the hallway toward the restrooms, too. 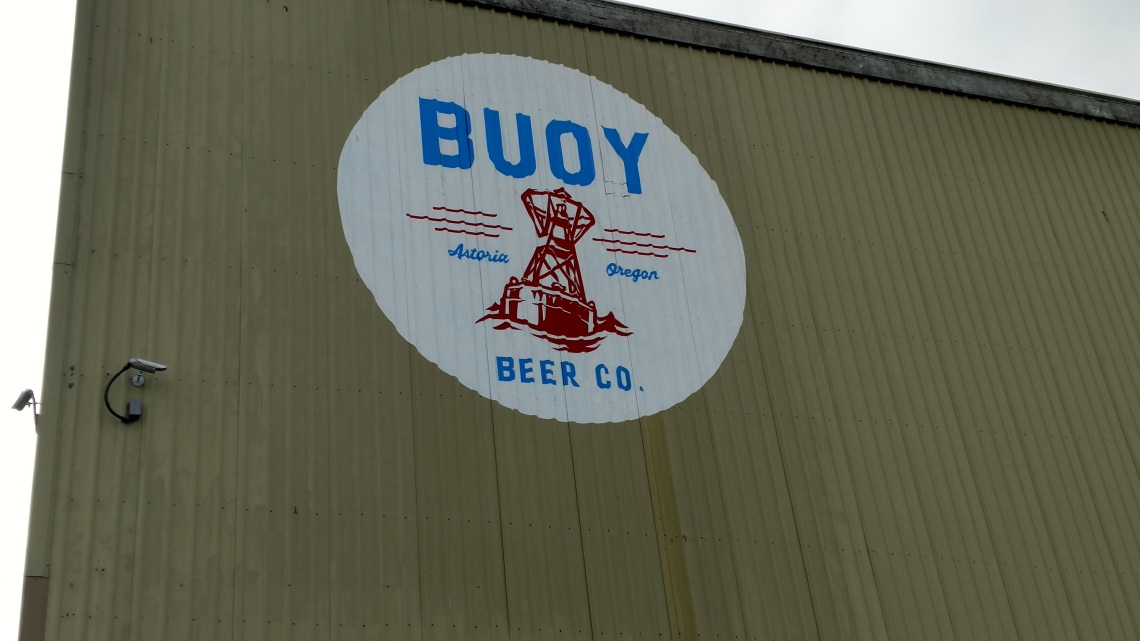 Driving home, we took Hwy 30 along the Columbia River, then crossed the bridge up into Longview, WA. Dave commented that Longview is the most like an actual shipping port that he has seen on the Columbia. I tend to agree. 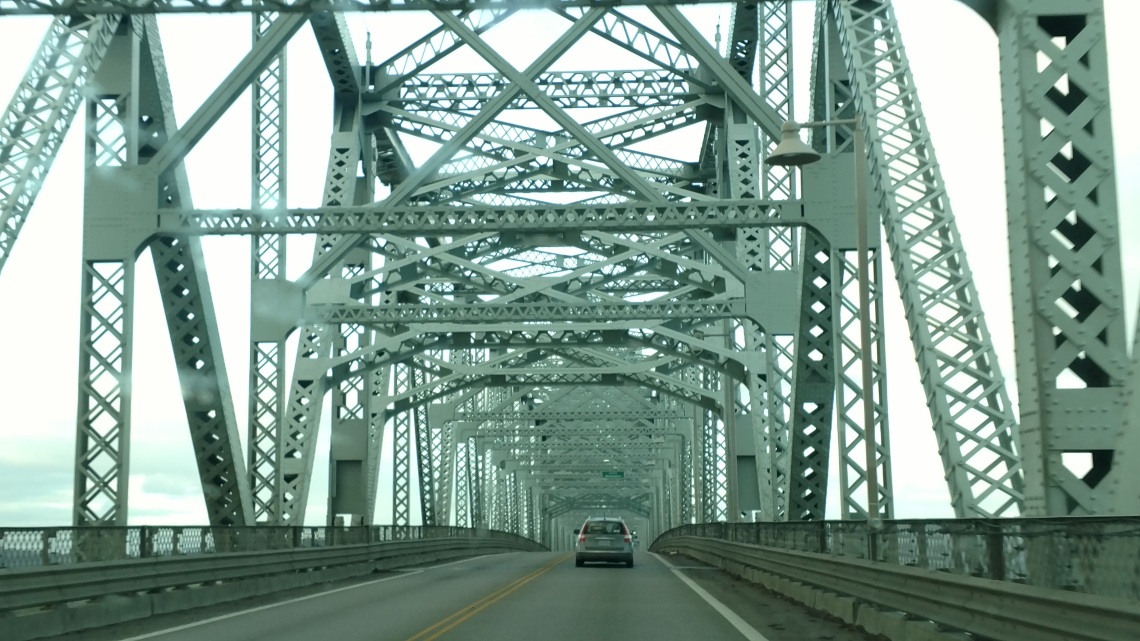 What a great day. Gorgeous weather, fun day on the trolley and boardwalk. Looking forward to our next visit to Astoria.

If you’d like to learn more about the things we saw, here are some links: This Barred Owl is hunting squirrels outside one of our bedroom windows today. He's perched on a branch only 6 feet from our building.
Speechless.
Un bâtiment orné typique quelque part dans Paris.
Memories of a road trip last summer...
Did you know that if you have a camera capable of taking 360° photos, you can contribute to Google Street View?
Adventures on a Budget, tip 4:
Loading Comments...
%d bloggers like this: